Introduction: In the absence of renal osteodystrophy, symmetrical uptake on 99mTc-bone scans is an exceedingly rare finding and not the typical pattern seen in metabolic bone disease or skeletal metastases. We report a rare case of Erdheim-Chester disease in a patient with breast cancer.

Case: A 63-year old female with hormone-receptor-positive breast cancer was referred for evaluation of an abnormal bone scan, which had been performed for staging. This displayed increased 99mTc activity bilaterally in the long bones of the upper and lower limbs (Figure 1). She was asymptomatic. There was no history of metabolic bone disease, osteosclerosis or sickle cell anaemia. A regional bone scan performed 5 years prior showed increased uptake, but to a lesser extent, in the distal long bones.

Myeloma, hyperparathyroidism and vitamin D deficiency were excluded and a maker of bone turnover, specifically urine deoxypyridinoline,  was mildly elevated.. Plain radiograpphy demonstrated sclerotic changes of the long bones and MRI demonstrated symmetrical abnormalities within the trabecular compartment and marrow signal . Bone biopsy of the proximal tibia demonstrated foamy histiocytes with weak BRAF positivity, associated fibrosis and sclerosis, supporting a diagnosis of Erdheim-Chester Disease.  There was no evidence of associated endocrinopathy or typical changes seen in Erdheim-Chester such as hairy kidney or cerebral involvement.

Discussion: Erdheim-Chester disease is a rare histiocytic disorder that classically results in symmetrical bone scan uptake with sclerosis of the long bones. Our patient was asymptomatic and may display an indolent course. Other cases may result in endocroniopathy such as diabetes insipidus, and potentially fatal multi-organ involvement. BRAF inhibitors, interferon or glucocorticoids may modify the disease course,

Conclusion: Symmetrical long bone sclerotic changes are classical of Erdheim Chester disease. Due to potential multi-system involvement, recognition of this disorders and regular monitoring even in an asymptomatic patients is necessary. 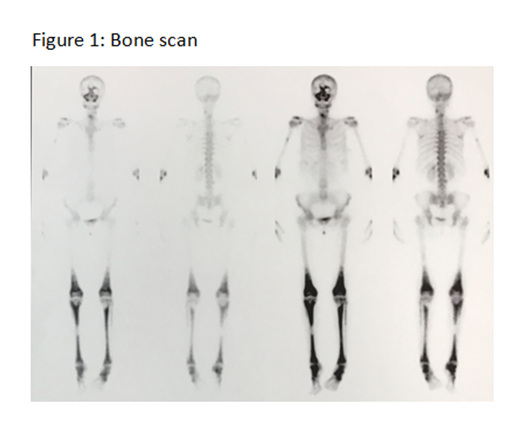