We observed eight patients with 28-166% higher prolactin by the Roche versus Siemens platform during routine clinical practice. Some patients had cause for true hyperprolactinaemia but there were no clinical changes in any case to explain the higher Roche levels. For example, a woman with schizophrenia had hyperprolactinaemia at 7-fold ULN by Roche, prompting investigation for prolactinoma. Pituitary MRI was normal and repeat prolactin by Siemens was only 2.5-fold ULN, consistent with her longstanding antipsychotic use.

Hence, we measured serum prolactin in both assays using split clinical samples (n=40) across a range of serum prolactin (5-5051 mIU/L). This revealed that serum prolactin was approximately 50% higher by Roche compared to Siemens (Fig 1), despite similar reference ranges. Review of the original Roche data showed no technical error in reference interval calculation; the reason for discordance thus remains unexplained. We speculate that the recent divergence in measurements may relate to either progressive positive bias with successive reagent lot numbers, or antibody deterioration.

Our findings of prolactin inter-assay discordance emphasise the importance of verifying reference intervals and performing bias checks over time. Endocrinologists should be aware of the potential for prolactin overestimation and the utility of repeat testing on different platforms. In mild hyperprolactinaemia by the Roche platform with normoprolactinaemia by other platforms, patients may be spared from unnecessary endocrine reviews and MRI studies. In true hyperprolactinaemia, separating patients with mild versus severe hyperprolactinaemia will narrow the diagnostic possibilities. 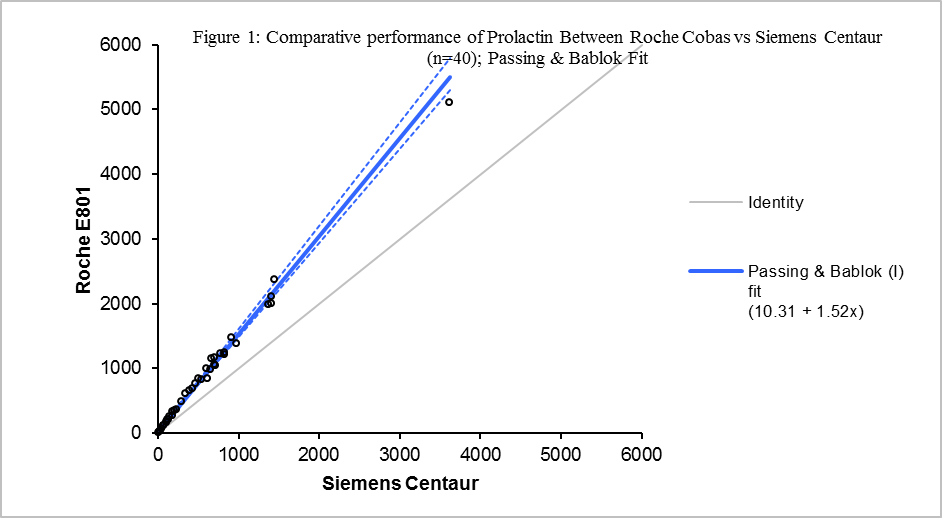